In the Audio and Podcasting session of EMP, participants learned about the basics of recording audio, including setting up Yeti microphones, system preferences and the fundamentals of using Audacity.

Partially written scripts were provided that follows our intrepid travellers from our transmedia story, now called 50 Minutes to Joy.    Here, we have Zlatan, baby Joy and the old man, now named Winston, rumbling down the #1 highway in Saskatchewan in their VW van, headed for Regina for a yet to be revealed reason.  Of course, they are guzzling a perhaps mystical coffee called Finepour to help them as they head towards the massive thunderstorm.

Here is the second of two of the filled-in scripts: 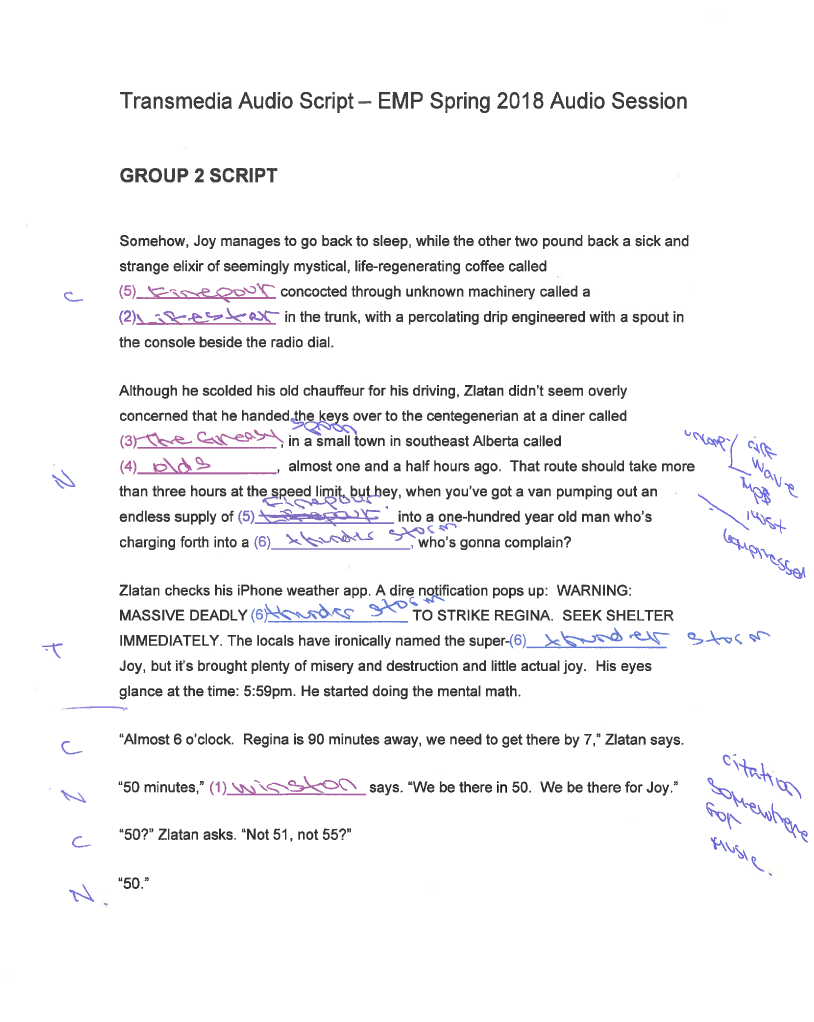 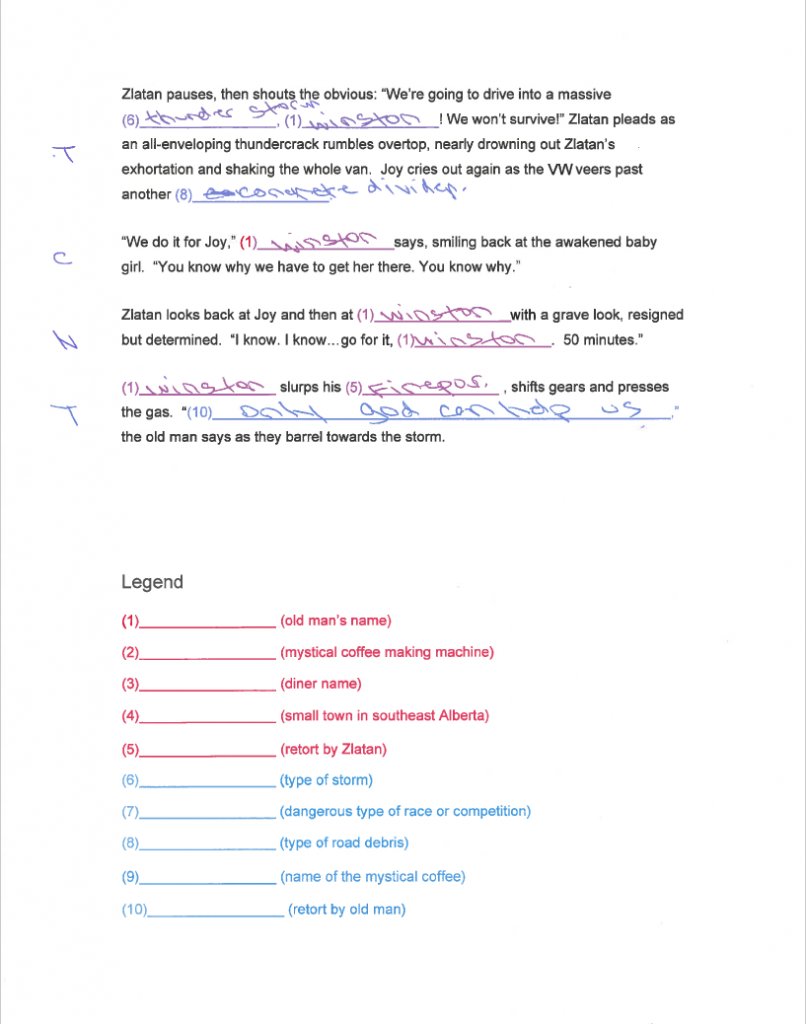 Next the second script was chosen to record.  The group of three each took turns reading the script, learning how close to be to the mic and the pickup patterns of the Yeti mic.

Here are the written version of the filled-in scripts:

Lighting shatters in the distance.  The old man,Winston,races the VW out of Chaplin, Saskatchewan, with winds scuttling up the paneled sides of the vintage van. The speedometer was punching up to 140 kilometers an hour, causing the 1960s-era mini-bus to shimmy back and forth across the double lanes of Highway 1, narrowly missing concrete,cars, downed power lines and trees from storm.

“Watch where you’re going, Benjamin Button!” Zlatan yells at the elderly driver.  “This isn’t a game!”

The newborn baby in the baby seat in the back cries out at Zlatan’s screams. “Bah!  See?” Winston scoffs. “You loudmouth. Yell too much. Wake up baby. Anger Winston.”

Zlatan looks back at baby Joy, lying in her fuzzy purple onesie in her carseat in the back.

“Joy, sweetie, go back to sleep, okay?” Zlatan says in a soothing voice as he tucks her back in and tries to rock her in her seat. “We’re almost there, okay? And then all of your dreams will come true. We’ll all be happy and peaceful.”

A bolt of lightning strikes a tree and splits it in half and starts a fire.

Zlatan looks at the burning tree while he holds his big strained smile, then he looks back at Joy, who smiles back. “As long as the thunderstormfrom hell doesn’t kill us, hey little pumpkin?” he says in a high-pitched voice.

Joy squeals in delight at Zlatan’s goofy doomsday gloom. “More coffee, more faster,” Winstonsays as he guzzles another cup of coffee and presses the gas pedal harder.  The biodiesel van roars to 150 klicks, topping out the speed and blasting past over cars that seemed to sit still in comparison.  It seems to almost skimming the pavement, alternately bouncing, hurtling and what felt like flyingslightly over the highway.

“Hell’s Bells, what did I sign up for?” Zlatan says back to the old man.

Somehow, Joy manages to go back to sleep, while the other two pound back a sick and strange elixir of seemingly mystical, life-regenerating coffee called Finepourconcocted through unknown machinery called a Lifestar in the trunk, with a percolating drip engineered with a spout in the console beside the radio dial.

Although he scolded his old chauffeur for his driving, Zlatan didn’t seem overly concerned that he handed the keys over to the centegenerian at a diner called The Greasy Spoon, in a small town in southeast Alberta called Olds,  almost one and a half hours ago.  That route should take more than three hours at the speed limit, but hey, when you’ve got a van pumping out an endless supply of Finepourinto a one-hundred year old man who’s charging forth into a thunderstorm,who’s gonna complain?

Zlatan pauses, then shouts the obvious: “We’re going to drive into a massive thunderstorm,Winston! We won’t survive!” Zlatan pleads as an all-enveloping thundercrack rumbles overtop, nearly drowning out Zlatan’s exhortation and shaking the whole van.  Joy cries out again as the VW veers past another concrete divider.

“We do it for Joy,” Winston says, smiling back at the awakened baby girl.  “You know why we have to get her there. You know why.”

Zlatan looks back at Joy and then at Winston with a grave look, resigned but determined.  “I know. I know…go for it, Winston.  50 minutes.”

Winston slurps his Finepour, shifts gears and presses the gas.  “Only God can help us,” the old man says as they barrel towards the storm.